International Women’s Day: On Hearing Each Other

Editor’s note: International Women’s Day theme for 2021  is Choose to Challenge. We asked our leaders to present their personal views and share stories of challenges they have undertaken. Meet Sherryanne Meyer, Director of Corporate Communications for Rizing. These are Sherry’s personal observations.

One of my early communications teachers summed up the most critical aspect of communications in the phrase, “She(he) had different parents than you.” The phrase stuck in my head. All of us – each of us – brings something unique to work, to the conversation, to our interpersonal interactions. How, then, do we change what we know to understand and embrace that which is not so deeply ingrained in us by birthright, by childhood development, by experiences?

In business, we value quick thinking and rapid responses. Our brains are organized to process information in a variety of ways – the simplest being a reflex. But when we allow that reflex to dominate, what happens?  We stop really listening.

Beyond environmental factors, genetic sex biologically influences our behavior. For example, auditory and visual perception develops differently for boys and girls. But this should not be used to justify gender discrimination. What we need to understand is that each of us is hearing something in a different way. It’s like misheard song lyrics. In the song, “I Want to Hold Your Hand,” The Beatles sang, “I can’t hide.” The line is famously misinterpreted as “I get high.” Not yet – not in 1963. Perspective and context are essential to understanding.

My daughters and my ex-husband, and I were in family counseling following our divorce. The counselor asked my 9-year-old to draw an animal that represented me. I was giddy with anticipation to see the cuddly koala bear I expected to see. What she showed me was a frog. “A frog?” I said, clearly disappointed. “Why?” “Because,” she said, “you jump.” Upon further exchange, it became apparent that to her, I wasn’t hearing her. In my haste to be supermom and super manager while working 60 hours a week, I was leaping to answers without hearing the whole problem.

In a communication exchange, we are often so focused on ourselves, our needs, or what we thought the outcome should be that we respond instead of relating to the other person. Relating involves allowing the other person to affect you, and that requires responsive listening. In business, we place a great deal of emphasis on speaking. We attend classes and workshops on how to deliver presentations. But how many of us are trained in listening?

In fourth grade, our teacher – Sister Mary Elizabeth – conducted a little experiment with our class to teach us to pay attention. (If you went to Catholic school with nuns, most of you know you paid attention or paid for not listening in a variety of ways – the worst was having the school call your parents.) But Sister Mary Elizabeth was wise beyond her advanced years. She taught us through practical experience. Following a class discussion, she sent one of the students out of the room. For the rest of us, our task was to describe exactly what that student had said, what they were wearing, how they exited the room, and more. That is harder than you realize. But it taught us to be observant at the moment.

I still forget to listen. I get overly eager and blurt things out on top of someone else. But the best and most profound connections I have were made when listening instead of talking.

The art of conversation is seeking to understand. 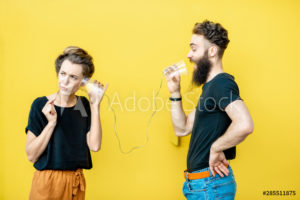 What we think we hear isn’t always what’s being said. Think about this as a simple radio diagram. A transmitter sends sound waves out, and a receiver on the other end captures those sound waves. In between the transmission and receipt of the message, there can be a whole lot of interference, broken signals, and disruption. When the message gets to the listener’s ears, it often isn’t as clear as it was in the original transmission. The same applies to human communication.

In the case of humans, we don’t hear the message clearly for a variety of reasons: we bring our own perception or preconception of what the message will be, or we aren’t fully listening because we have other things on our minds or are multi-tasking. Add to that language differences, slight variations in accents, missing knowledge, and background on the subject, and our personal experiences throughout life. There’s so much potential interference that it’s a miracle we get anything accomplished some days.

Seek to understand.  A two-way dialog is the only way to solve this.

As a manager of Global IT at a male-dominated chemicals company, my performance reviews frequently rated my communications as poor. After three years of hearing this disappointing complaint (that came via 360 reviews from colleagues in cross-functional departments), I confronted my boss. “The next time I communicate inappropriately or poorly – tell me. Even if we’re in a meeting,” I said, “kick me under the table or something. Because I don’t think I say anything different from what you would say.” He looked taken aback. We agreed he would give me immediate feedback. That was the last time my review criticized my communication style. Footnote: he never found a reason to coach me either. It seemed that the same message a male manager would deliver was not received the same when delivered by a female.

But there’s something else I learned from that exchange: what works for your manager doesn’t always work for you – especially if there’s a gender difference. That is why bringing your authentic self to the table is so important.

For people to hear you and respect you, you have to, first, show up – that is, bring your whole self in a way that inspires confidence, goodwill, and action. For the record, I think women work harder at this than men – simply because we feel the need to prove ourselves and the need to excel in all realms of our world.  But we are often derailed by multiple conflicting priorities.

My youngest daughter still reminds me (18 years later) that I was the last parent to pick up their child at Girl Scouts, leaving her anxious and sad.  I struggled to show up for my daughters and simultaneously show up at work with the same engagement level.  I was late trying to be everything to everyone at work. Juggling these multiple priorities became my Achilles heel. Emotion overtook me as I attempted to balance my life – and with emotion so highly at play, it became difficult for me to influence with logic at work.

I had the good fortune to hear Harvard Business School Professor Frances Frei speak at the 2017 SuccesConnect conference, where she described a “trust triangle.” The foundation of this trust triangle is authenticity. Authenticity must be joined by empathy and logic on the other two sides of the triangle. Many of us have a problem with one side of the triangle – that’s our wobble, as Frei describes it, and she encourages us to work on our wobble. 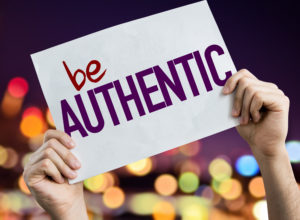 Empathy and logic can be learned. But authenticity is a process. And when we are with people who aren’t like us, it’s hard to be authentic. As the lone single mom at work, I struggled to compete with other managers. I could never admit I couldn’t do it all. The foundation of my trust triangle was threatened continuously.

When we hold back who we really are, others can sense it, and trust evaporates on both sides. But if we can share the special challenges that being a working woman poses, we bring our triangle a little more into balance.

And when we wholeheartedly embrace the differences others bring to the table – in appearance, behavior, thought, race, culture – we allow others to bring their whole authentic selves to the conversation.

Frei says one other thing that I love. She encourages us to beware of the “common information effect.” Some of my very best friends are so unique that my other friends shake their heads in dismay at them. But I love the roller coaster of unexpected dialog and activities. I embrace the challenges of my own way of thinking.

In her TED Talk, Frei reminds us:

A final rule of communication – at least as far as this blog goes: be careful of editing out too much – out of what you need to say and out of what others are saying to you.

Be open to the world. Challenge yourself to speak your truth – but be empathetic about it to build a trustful dialog. Ask questions to better understand. Because most things aren’t really what they seem on the surface.  After all, you don’t know my parents, and I don’t know yours. That realization is where inclusion begins.

For more information read The Psychology of Sex Differences by Dr. Eleanor Macoby

For a more entertaining look at how we communicate and the importance of relating, read Alan Alda’s If I understood you would I have this look on my face?

For research-based content on how genetic sex influences our behavior, check out  The Genetics of Sex Differences in Brain and Behavior by Tuck C Ngun, Negar Ghahramani,* Francisco J. Sánchez, Sven Bocklandt, and Eric Vilain

Sherryanne Meyer describes herself as a work in progress. She has been an administrative assistant, HR specialist, Global IT manager, lifelong learner, speaker, writer, and, most importantly, a mom of two grown daughters. Today, as the Director of Corporate Communications, Sherry is joyfully combining all of those skillsets to develop internal and external communications for Rizing.

Sherry served on the Board of Directors for Americas’ SAP Users Group and led the development of the Human Capital Management community there. She contributed to the writing and publication of the Book of Knowledge for the Association for Workforce Asset Management (AWAM) and the certification program for the International Human Resources Information Management (IHRIM). Sherry is an SHRM Senior Certified Professional, as well as being WAM-Pro® certified, and HRIP certified. As an active member of the technology community, she also contributes to the HR Technology Review Council led by Nov Omana and to the SAP SuccessFactors Confidants council.