The SAP SuccessFactors H1 2021 Succession Planning release update is now in preview. According to the SAP SuccessFactors 2021 release schedule, the second-half update will go into production on May 21st. To help you out, we’ve broken down the major updates into bite sized pieces to help you get ramped up on the latest changes.

Additionally, we hosted a LinkedIn Live with our experts to discuss the SuccessFactors H1 2021 Talent release.

Now let’s jump into the latest in the Succession Planning release:

With this enhancement, will allow users to easily track all the historical notes for nominations.

Can now View Nomination History for a Nominee in Talent Card and People Profile: Users with the proper permission can now view any nomination information change (including note changes) for a nominee in the Nominations section of a talent card and the Current Nominations block of People Profile

With this feature, is an improvement in usability for end users to easily track who made the change, why the change occurred, and which nomination was involved. Even deleted nominees are included in the nomination history table and therefore visible to users. 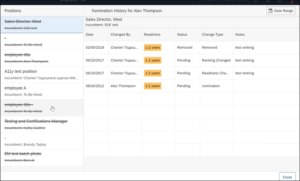 Update to Career Explorer: After choosing View Recommendation Reasons in the role card, employees can view the reasons why the job roles in the first layer of a job lineage chart are recommended to them.

The reasons are given based on the employee data, job information, and job history of the employees in Employee Central. As the roles in the second and onward layers are recommended using a different approach, no specific reasons are provided.

We built this enhancement so that before taking further actions, employees can look at the reasons and confirm whether recommended roles actually suit them.

Qualtrics Surveys for End of Mentoring

Surveys can now be sent at the end of Mentoring Relationships: You can now integrate Qualtrics surveys to get feedback from your employees when an individual chooses to end their mentoring relationship regardless whether the mentoring program as such has been ended 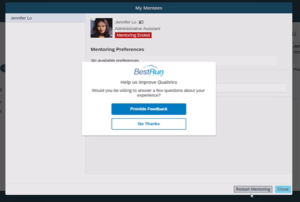 Save a Mentoring Program for Later

Mentoring programs can now be saved to be signed up to later: Their answers to signup questions and uploaded documents are saved, but mentees’ selections of preferred mentors are not saved.

Also, the program remains on the Invitations or Open Enrollment tab and is marked with an icon and the Saved for later text.

This enhancement allows participants to reconsider their mentoring preferences, prepare supporting documents, and have a chemistry check before they finally complete signup.

Mentees can now see which programs they have signed up to: A new icon and confirmation message improve the mentee signup experience

After mentees sign up for a mentoring program, they can view pending and declined mentor requests, check reasons for declined requests, and cancel pending requests

More to Come for the latest SAP SuccessFactors 2021 Releases

Managing releases takes a lot of effort. With that in mind, we compiled the best tools out there in our e-book The Ultimate Guide to Managing SAP SuccessFactors Release Updates