The H1 2020 Calibration and Succession releases in SAP SuccessFactors are now available in preview. As a reminder, the SAP SuccessFactors release schedule has moved from quarterly to twice-yearly. While the updates and optimizations are less frequent, it does mean more tangible changes when releases arrive.

The preview release for H1 went live on April 10, with the production release now delayed to June 5 to give customers extra time during the COVID-19 outbreak.

This half’s release has been kind to Calibration. All of the enhancements for Calibration are universal updates, meaning that these will be applied to all instances of SuccessFactors. This is primarily because they are enhancements on existing functionality and also designed to be more efficient, rather than out and out brand-new features that would otherwise need to be opted in by an administrator.

Previously, we could leverage different types of ratings, including Overall Performance, Overall Potential, Overall Objective, and Overall Competency. For configurations in a performance review cycle that made use of the Overall Customized Weighted Rating, until now, that functionality was not available in Calibration. This enhancement changes this, and this rating is now possible to use in a calibration session in conjunction with the existing ratings. Either the manual or the calculated customized rating can be used.

The Subjects List page has been given additional options that help facilitate the Calibration session. Previously, the system didn’t “remember” any view customizations, and so if you refreshed the subjects in the session, the user would need to reselect the customized view elements. In this release, achieving parity with other modules, the system now has persistence on the options chosen in the Calibration view. Additionally, to aid with the calibration sessions, the system now allows a print out of the Subject list for any offline review that may need to be done.

With ensuring accountability on data that has been entered into the system, SuccessFactors have introduced a great enhancement on the “comment” functionality. Previously, the comment box was simply a pop-up with very little information aside from the comments that had been left by someone. With the new enhancement, the system now displays audit details of who left the comment and when, and if applicable, who authorized the comment. Additional basic information on the subject is also available, including department and Manager name.

Comment leaver names and dates are automatic, but there is an option to turn on the authorizer name when an administrator activates this in the Calibration Template. 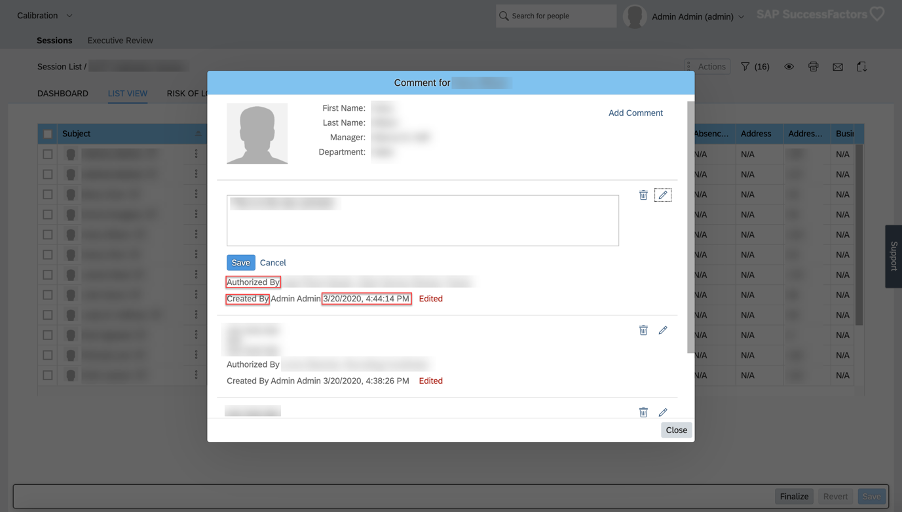 A regular request, especially from those generating reports on Calibration sessions, was the ability to select some “audit” relevant fields from the finalized session. In the H1 2020 release, SuccessFactors have added the following fields as columns in both Ad Hoc reporting and SuccessFactors Analytics Centre reports:

By adding the Last Modified By feature pulls through the user and dates that are generally regarded as the Approver (as they are the last person to touch the session to approve and finalize).

Achieving parity with some of the other Fiori design elements located around the system, SuccessFactors has now included the toolbar on the Matrix Grid View in Calibration. To see the toolbar, you need to activate “full-screen mode”. This enables the same tools that are available in normal mode as well as full-screen mode, which gives users a better UI experience:

I told you this was a big release! Moving on to the Succession tools, SuccessFactors have also given this area some needed attention.

When using the API to import data into the system, SuccessFactors have now added two extremely useful functions for the OData API. Historically, the standard APIs only allowed the integrating system to read the nominations of Pending Approval Status. Now, with this enhancement, third party integrating systems can write to Approve or Reject nominees that are in a pending status.

This is an enhancement that improves the usability and readability of the Matrix Grid Reports and the Talent Pool Nominations pages. Previously the system would only display the ID of the picklist value, and so if unfamiliar with the way the picklists had been set up, it could cause some confusion.

As long as the picklist has been configured with values in the data model, the system will now pull through the labels in all the supported filter fields in the Talent Pool Nominations and the Matrix grid reports, leading to better user experience.

Exclude Nominees from Seeing Themselves Within a Succession Plan

Another enhancement that has been requested by customers who are sensitive to security around what a user should and shouldn’t see, this enhancement ensures that employees who are Nominees to a position now CANNOT see themselves when viewing a succession plan.

How to get it: Admin Opt-in

A brand new feature within Succession now gives the ability to see the Nomination History of nominees for particular talent pools, as long as the correct permissions have been set by an administrator.

How to get it: Admin Opt-in

Due to the way the original Role Based Permission Set was designed, it was impossible for managers to be given access to the Talent Pool nominations of their direct reports in the Talent Card and People Profile WITHOUT giving them access to all the talent pools. This new feature, which is activated at the provisioning level, now grants managers the ability to see those nominations without having to give them the RBP permission that would otherwise give them access to the other talent pools.

How do I get it: Provisioning Opt-in

Another user experience enhancement, as part of this release, SuccessFactors have tweaked the way the Nomination Table and the Filter fields work:

The H1 2020 Recruiting release is just a part of the latest SAP SuccessFactors update. Continue to follow Rizing HCM on LinkedIn for release analysis of more modules in the coming weeks. Customers should also follow the SAP SuccessFactors Community Page for the latest updates and roadmaps.