Purge Inactive User who is a Calibration Sessions only Facilitator

The user purge is a key functionality to satisfy Data Protection requirements and works throughout the system. However, with functionality being so ingrained and linked to different modules, issues arise from trying to purge records that are elsewhere used. An example of this is when you have a user that’s denoted as a Calibration Sessions ONLY Facilitator, and they have been marked as inactive.

In this release, SuccessFactors has included an option in the Manage Calibration Settings tool in the Admin Center to select a replacement user for the inactivated one. Once the purge is then run, the system will automatically replace the inactive purged user with the tool’s selected user.

Some customers had requested that as “Too New to Rate” did not apply to their process during calibration sessions. A new option in the Manage Calibration Settings tool called “Remove “Too New to Rate” from rating options for the rating types from People Profile data” has been added, which then removes this rating type as required.

View Comments from other Calibration Sessions

A really great feature that SuccessFactors has rolled into the H2 2020 release is to be able to see employee calibration comments from other calibration sessions based on the same calibration template. This is handy, especially where users may have been calibrated at different levels or functions using the same template.

To switch this feature on, administrators simply need to navigate to the Manage Calibration Settings tool in Admin Center and enable the “Roll up comments from the other sessions based on the same template” setting. 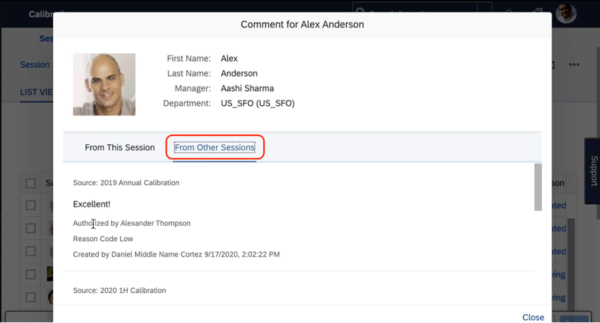 This Fiori-based enhancement now extends the autocomplete/search ahead feature into the Calibration tool. As the facilitator creates the session, they can begin typing the name of either the Subjects and/or Participants and/or additional Facilitators in the appropriate boxes. The system will predictively suggest users based on the input.

This feature is available in the following areas of Calibration:

Additionally, the UI allows multiple users to be added in the same field by just typing and selecting the suggested users. There is no need to keep clicking an “add user” box.

Another UI enhancement that was requested was better visibility of the talent cards when zoomed in to a specific cell in the Matrix Grid. SuccessFactors have improved this functionality so that when you are zoomed into a cell, the other cells will continue to have the users’ full card view, and if there are more subjects than the shrunk down cells will allow. A scroll bar is available to scroll through the remaining subjects within those cells. 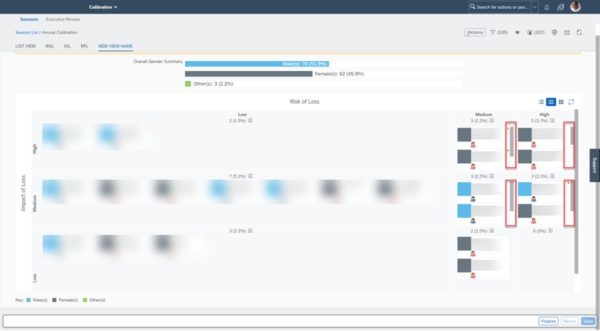 Historically, before Role-Based Permissions, customers were using a different permission model to restrict users from seeing or performing tasks in the system. The introduction of Role-Based Permissions gave system owners access to granular permissions for their user and admin populations several years ago. For many years, SuccessFactors supported customers both on RBP and non-RBP permission models. As no other customers are using the traditional model, some options used to give flexibility to both models’ users are redundant. In this particular scenario, the following options have now been retired as RBP effectively manages the permissions for this module:

Personally, this is one of the enhancements that made me do a little air-punch. It had frustrated me that when I wanted to add comments to a calibration subject, I would have to click on the three-dots menu and then select “comments” to do so. What was stranger was that when a comment had been left and then the comment icon was available, clicking on the icon would then allow you to amend and add comments as I’d have expected. This new enhancement had relocated the comment icon from its own column (meaning the page looks less busy, especially when no comments were added, but the column remained) to a simple icon next to the subject’s name. The UI is further enhanced by removing the comment column and a number next to the icon indicating the number of comments for that subject. This looks much slicker and nicer to use:

For customers that are using the SuccessFactors API to integrate with the system, and specifically Calibration, a new OData entity called CalibrationSubjectComment allows the querying and retrieval of either ALL comments made for subjects in a calibration session or, by utilizing the CommentID to retrieve a single comment for a user.

More to Come for the SAP SuccessFactors H2 2020 Releases