This is the tenth and final part in a series of blogs designed to address Geographic Information Systems (GIS) in conjunction with SAP. We will do this by addressing the most important customer challenges.

Regulatory compliance can take on many forms. Organizations whose asset network is spread over a large geographic area will often share common types of regulatory related challenges with regard to maintenance of an asset network such as a pipeline, electric, or rail network. This post will take a look at some of the cross industry regulatory activities and address some of the ways that integrating SAP and GIS platforms can save time, money, and ensure all operations are executed in accordance with all regulatory requirements.

Organizations with an asset network that travels through different areas with specific regulatory requirements will often have business processes in place to identify and acquire the requisite permits to perform work against the assets in these areas. This could include permits required for work performed in environmentally sensitive areas, areas where a Right of Way is present, and land owned by indigenous populations. With the integration of GIS into SAP using SAP's Geo Framework (GEF), planned and unplanned work can be rendered on a map, layered on top of regulated areas.  This work includes preventive, corrective, regulatory, and inspection work. can be rendered on a map and layered on top of regulated areas that are represented as polygon features. Work orders falling within these boundaries can be set up to have the relevant permitting operations automatically loaded into the work order, setting the permitting process in motion automatically. Not only does this save time in the permitting effort up front, it also ensures the permit procurement process is not overlooked. This type of planning can prevent crews from being turned away from work sites or avoid fines due to completed work without the required permits.

Periodic regulatory reporting imposed by regulatory bodies is a fact of life in many industries. The scale and complexity of these reports can vary widely, however the major challenges are generally the same:

In an organization whose GIS and SAP systems operate without an automated interface, gathering the data to drive compliance reporting is only half the battle. The task of getting data from separate systems to match up can be a daunting task. The reason for the additional effort can be attributed to any number of reasons, however the most common reasons relate to the differences in the way data is maintained in each system, as well as differences in the business processes influencing the data maintenance. These inconsistencies can manifest in something as simple as a typo in one system that is not reflected in the other, to something as complex as the precision and detail at which the data is required to be stored in each system.

A common example of this is reporting on lengths of assets located within tax jurisdictions. In some cases, the length of assets are recorded and stored in GIS as the length of the two dimensional shape on a map.

On the other hand, SAP may contain a length that was calculated by the actual footage of the material installed, accounting for the additional material used due to elevation changes along the length of the asset. When trying to compare the footage of a given asset between SAP and GIS, the numbers will not match. If these conflicting numbers make it into the same report in different locations, it will give regulators the impression that none of the data is correct, spawning costly audits and possible fines. With the preceding issues in mind, reporting that marries work-related data in SAP with location-based data in GIS can pose quite a challenge.

The implementation of an automated interface between enterprise wide GIS and SAP can mitigate the pain points above by ensuring the records created, modified, or removed from one system, are automatically reflected in the other system. Looking back at the previous example, integrated systems would be able to reflect the correct geometry from GIS while pulling in the correct length values from SAP, resulting in reports that will easily reconcile between the two systems.

As long as the full set of data required by the report is shared by both systems, a user no longer has to request data from each system and combine the data into a single report, solving the second pain point listed earlier. Instead, the user compiling the report simply needs to be able to find the data in either SAP or GIS. Since there is no longer the need to go to multiple systems to compile the report, there is no longer the need to make sure the datasets agree with each other since there is now a single, reconciled dataset available for reporting.

Reporting on the fact that your organization is compliant is one thing, but what if you are asked to prove it? A great example of this kind of proof of compliance reporting is inspection work. Going into the field and inspecting infrastructure on a periodic basis is something that many companies must comply with. From a compliance perspective, there are rules in place that require some infrastructure to be inspected more frequently than others. These inspections are often driven by public safety and the records of these inspections are the first place investigators will look if something goes wrong. With the proper processes in place and tools in the field, proving an inspection took place when and where it was recorded is much easier to prove. 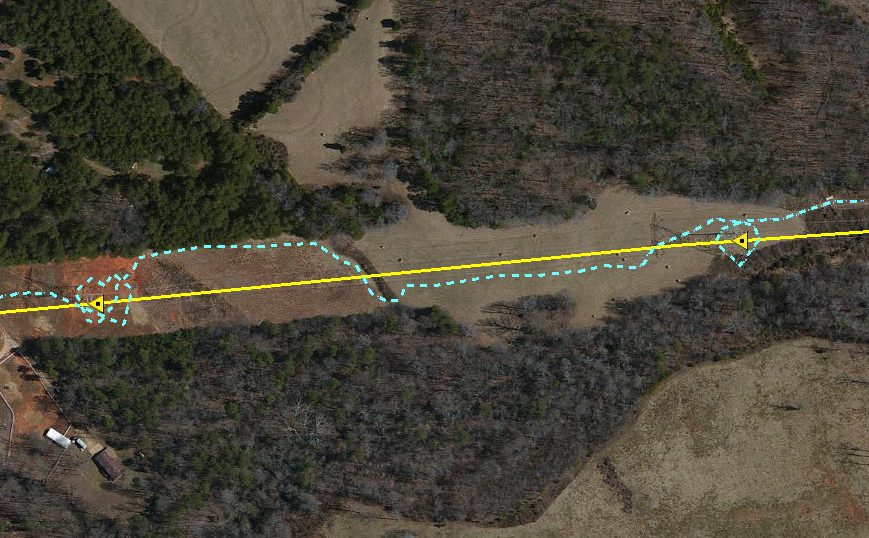 In this case, GEF opens up quite a bit of new functionality in SAP, as well as opening up new possibilities for existing tools within SAP. Work, for example, can now be rendered as geometry within GEF. This geometry can be pushed to SAP Work Manager, SAP's mobile work management solution, giving a field user the exact location of the assets to be inspected. While preforming the inspection, Work Manager can capture the device's coordinates at a defined interval, creating evidence of the exact location of the inspector at the time of the inspection. This data can be attached to the work order and recalled as part of the work order history. The image on the right illustrates how the location of the inspectors, during an electric transmission tower inspection, is captures and saved with the Work Order as additional proof of inspection. This data can also be used as a form of quality control within the organization to ensure the most efficient inspection routes are being utilized. This data can also be published to the GIS system, giving auditors easy access to the time and location of inspection rendered next to the relevant assets on a map.

About the Authors: The GIS blog post series is a collaborative insight channel, brought to you by the Rizing GIS experts: